I wonder if Velazquez’s Prince Baltasar Carlos was also influenced by another of Sofonisba’s paintings, one recently attributed to Sofonisba, her Portrait of the Princes of Savoy, the First Children of Carlo Emanuele e Caterina Micaela (1589, Torino, attributed by Alfio Nicotra in Incontri, Oct, 2013). 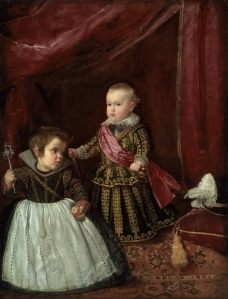 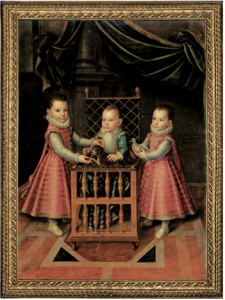 Velazquez centered the baldish baby heir the same way Sofonisba did. The dress Velazquez gives Prince Baltasar Carlos angles backward just like the right figure in Sofonisba’s. Then the folds in the dress of Velazquez’ dwarf on the left echo the folds of Sofonisba’s prince on the left. The arms of the figures in both portraits reach toward the center, as if creating an invisible circle. The drapery above and dark backgrounds behind the children are similar in each. The luxurious carpets beneath both have similar horizontal bands framing the bottoms of the portraits. Both pieces are highly detailed in gold.

Even if we cannot be certain whether Velazquez copied Sofonisba, we do know who came first. Her Princes of Savoy preceded his Prince Baltasar Carlos by forty-three years.